Speak for the Trees Boston 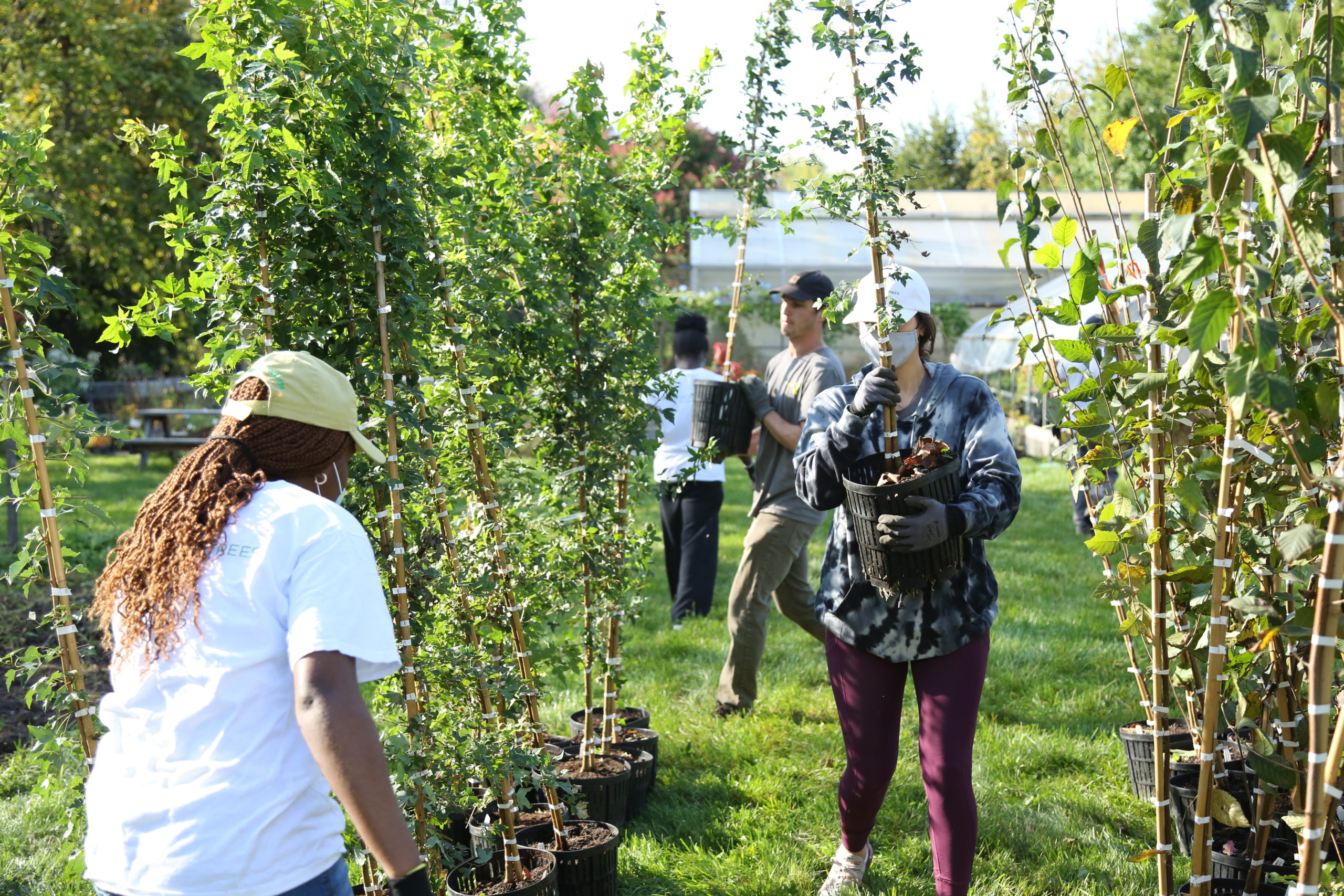 On October 16th and October 23rd, Speak for the Trees hosted two tree giveaways for Boston residents. These events were made possible by our generous sponsors: Stop & Shop through a partnership with the Arbor Day Foundation, Accenture, ChipDrop, Brookline Booksmith, as well as the Trustees of Reservations, who generously hosted the events at City Natives, their nursery and horticultural education center in Mattapan. 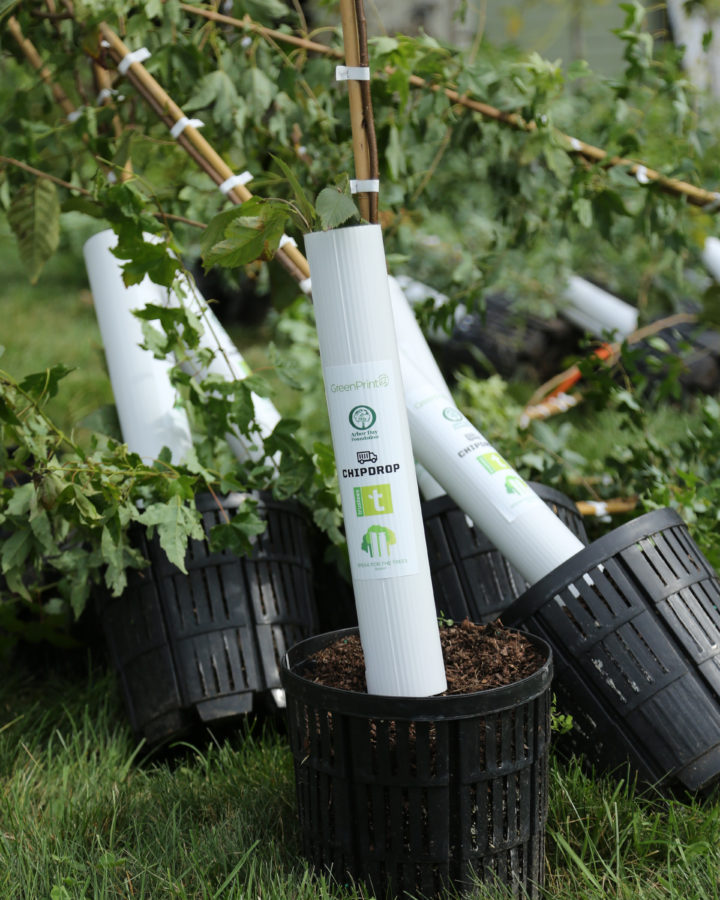 City Natives, a fenced-in garden just west of the Neponset River, was guarded by a buffer of tall oaks and pines and surrounded by plants available for purchase. The space also serves as a site where members of the public can volunteer or attend an experiential workshop to learn about gardening in urban settings. 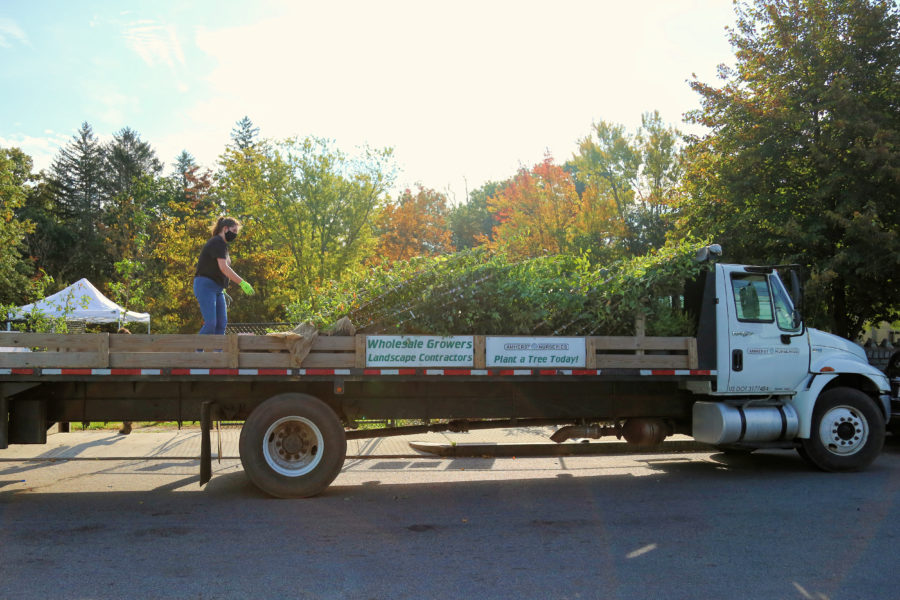 A volunteer unloads giveaway trees from Amherst Nursery in front of City Natives.

The tree giveaways attracted tree recipients from all over the Boston area: some residents were from just down the street in Mattapan, while others came from as far as Brighton. Volunteers joined as well, including employees from IT and consulting company Accenture, professional arborists from tree care company Harrison McPhee, and teens from last summer’s Teen Urban Tree Corps program. 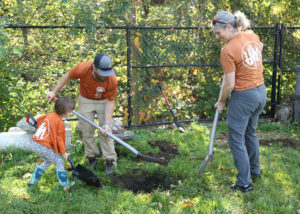 Volunteers from Harrison McPhee dig a hole for our tree planting demonstration, assisted by a junior arborist.

The giveaway included the distribution of 200 trees native to either the northeastern United States or similar planting zones abroad. In other words, trees were selected to be non-invasive and suitable for Boston’s environment. Such species included: 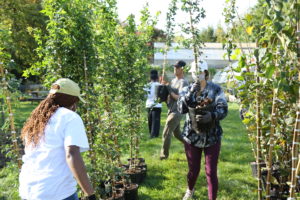 As residents arrived, they were greeted by staff and volunteers who checked their registration and gave them packets of information about planting and caring for the specific species of tree they had registered for. Volunteers then escorted tree recipients to a demonstration area, where they were taught how to properly plant and water their new trees. 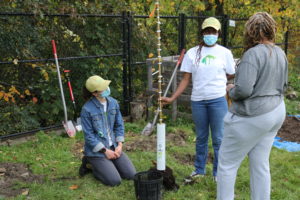 One of our TUTC teens, Johanna, shows a tree recipient how to plant a tree under the supervisions of Eva Paradiso, our Education Coordinator.

The best part of the tree giveaways was the recipients’ reactions. We distributed about 150 trees to about 100 households, and we were delighted to see how excited they were to take their trees home. Many of the recipients initially registered to pick up one tree, but many of them left with two or more. One family brought along their 8-year-old son, who was noticeably excited to plant and take care of his new tree. Our staff helped the family bring their tree to their car, only for the little boy to return. “Can I get another one?” he asked us. This process continued until the family’s car was full – they left with 5 trees! 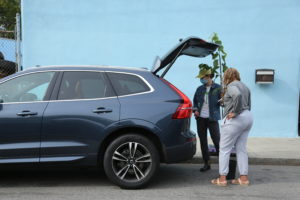 Eva helps a tree recipient put her new tree in her car.

Before participants left to plant their trees, we asked them what receiving free trees meant for them and for their community. Here’s what they told us:

“I’m contributing to our environment, to lessen global warming.” – Serge

“I did not personally know [about the tree I had signed up for] and when I found out about the foliage in the fall, I got very excited. When I think of it, I think of vibrancy and color and changes that are happening in my community.” – Jessie

“What it means to me, to get this tree for our yard, is having something to help with the pollution in our city. Living on a 4-lane avenue, I’m hoping this will help with that. And the tree that I chose is very highly disease- and rodent-tolerable. I just can’t wait to plant!” – Nicol

Our tree giveaways may be over for the fall season, but we’ll have more in the spring when weather conditions allow for optimal tree planting. Be sure to follow us on social media and subscribe to our newsletter so you don’t miss out on our next tree giveaway event.

Thank you for caring about Boston's trees!